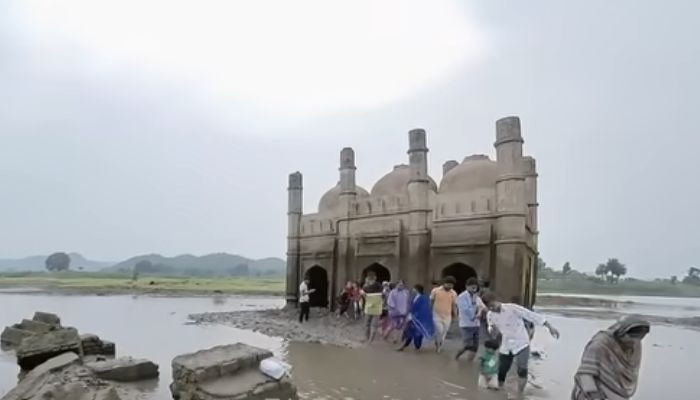 A mosque was discovered after water dried up at the southern end of the Phulwaria Dam reservoir in India’s Bihar, reported Kashmir Media Service.

The mosque was submerged in water for 30 years. Apparently people would remember the name was Noori Masjid. After the development of the Phulwaria Dam in 1985, the mosque drowned and became invisible to people.

The recovery of the old structure sparked people’s curiosity and many young people were seen trudging through the muddy water to reach the building.

People were surprised to find that the mosque was completely intact even after years under water. Families rushed inside and were amazed to find no damage to the structure.

Before the drought dried up the dam, part of the mosque’s dome sometimes appeared when the water level dropped. People couldn’t understand what it really was.

With the water gone, visitors can now enter and enjoy the architecture of the old building which is 30 feet tall.

KMS reported that the mosque existed even before construction of the dam began in 1979. The area was taken over by the government and evacuated in order to build the dam.

The population was relocated to the village of Hardiya and the mosque was not affected.

It is not known when it was created. Considering the architecture, many say it was built in the early 20th century and could be 120 years old.