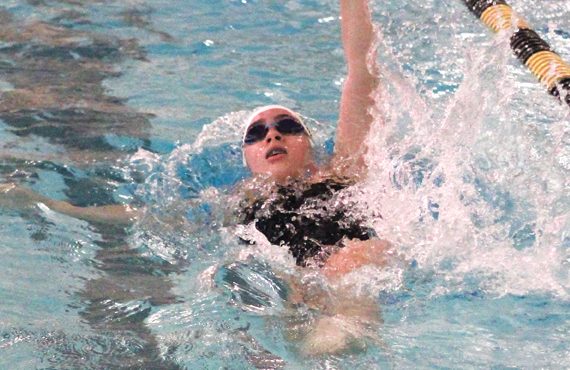 
BY KEN MORSE
NEW CITIZENS
If you thought the Woodland girls’ swim team that won back-to-back NVL titles — 2019 and 2021 with the COVID-shortened 2020 season with no post-season meetups — was good last year, they’re even a little spookier this season.
Woodland, who graduated five seniors, returns this year with an impressive 10 seniors who are in Finish What We Started mode.
“It’s crazy how it goes, in any sport really,” Woodland head coach Mike Magas said. “You get your peaks and your valleys. Some years you only have a large group of children and some you don’t. “I peaked a few years ago and then it followed a few valleys. In the last five years we’ve come back up and we’re at a point where we’re competitive in the league.
Competition is a bit of an understatement when you look back on a strong core of accomplished seniors who have largely featured in the last two Championship teams.
Maura Beltrami, Sarah Cooley, Ella Bernegger, Samantha Sharkey and Molly Kennedy have been making noise since their first season. Seniors Mackayla Bernier, Dylan Burkowsky, Liana Demirs, Alexia Rossi and Mia Sansone were solid contributors during championship runs.
Add that to the handful of subclasses that can put this team right up front with junior Emme Starzman and second Laura DeGennaro, and Woodland looks like the team to beat.
“I don’t know, there are several very good teams and nothing is taken for granted,” added Magas. “We have to keep working hard and doing one competition and one race at a time.”
The Hawks got off to a winning start, earning a 95-83 win over Milford’s Jonathan Law. DeGennaro posted incredible times, winning the 200 free yards (2:02.73) and the 500 free yards (5:32.55).
Beltrami was another double winner, winning the 100 butterfly (1:08.43) and the 200 IM (2:34.96). Starzman won the 50m freestyle (26.54), Kennedy won the 100m freestyle (59.64) and Ava Muharem won the 100m backstroke (1:17.77).
“I used to coach in college, and eight of the 10 seniors I coached when they were in sixth grade, so I coached them for seven seasons,” Magas said. “They know how bad my jokes are, but more importantly they know the system and they know what is expected. They are very excited and eager to leave. Our biggest concern is simply to stay healthy. We look good on paper, but nothing will happen if we don’t stay healthy and work hard.
The Hawks were scheduled to kick off the NVL portion of the season against Wilby/Kaynor on Sept. 16. Woodland hosts Seymour Friday at 3 p.m.

How Patagonia’s Redesign Challenges Marketers to Take Action on Sustainability